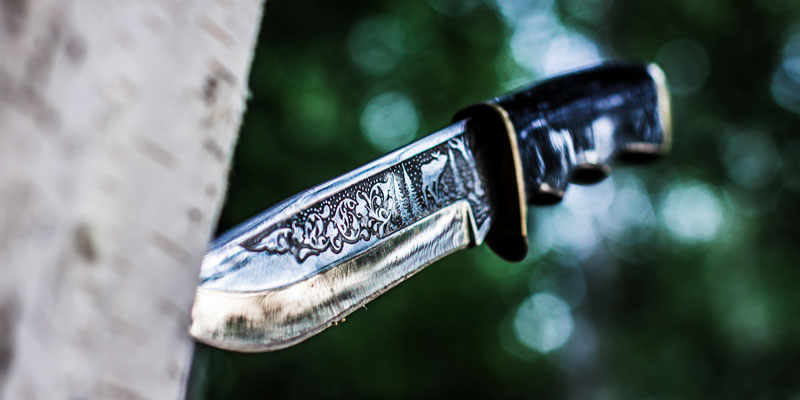 Knife throwing is far from a new fad. People have been throwing knives or similarly sharp objects for centuries, either for combat, hunting, or sport. There’s no denying that chucking a blade has its definite (although limited) advantages in survival situations. A good example would be hunting for small prey, such as rabbits.

Whatever your aspirations for practicing how to throw a throwing knife are, you should always do it properly and safely. And that’s precisely what you will learn in this guide. We will cover what kind of knife works best for throwing, the best targets for practice, where to throw, and the various grips and throwing techniques.

Before we get to the throwing itself, you need to make sure you have the right tools and a safe environment for using them. That way nobody winds up injured. Thus, we’ll start from the foremost point — what knife you should be throwing.

Obviously, you need to get a hold of throwing knives since, as you can see from their name, they’re crafted for exactly that function. Seeing that regular blades don’t have the balancing necessary for accurate throws, you would be far better off using specialized tools. You can practice with butter knives or cutting blades, but it’s difficult because different knives feel and throw differently. More importantly, handling a razor-sharp blade when you haven’t even mastered the basics of throwing is just begging for trouble.

So what kind of blade do we require? The ideal throwing knife has to cover the following: 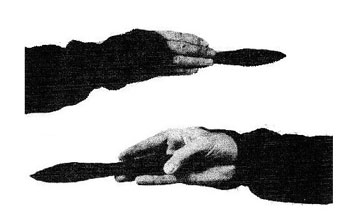 Where to Get Throwing Knives

Oftentimes, you’ll find a weapons shop that sells blades explicitly meant for throwing. If you have no such establishment in your vicinity, don’t worry, there are alternatives. You can come across dozens of places or people online who will gladly sell their knives to you. They usually come in sets of three.

You need a finely balanced knife in order to have a stable trajectory upon hurling. Judging by that, as well as by factors like weight, it is tricky when shopping online. The best solution would be to buy products made by well-respected companies. Perfect Point, Smith & Wesson, and United Cutlery are among those you can rely on for quality. 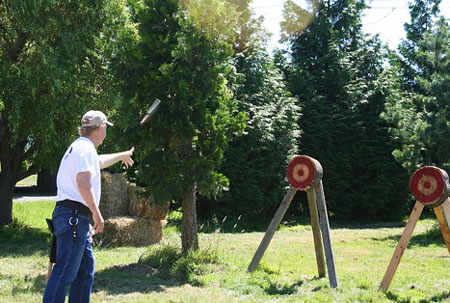 Now that you have the weaponry, the next point on your list is something to use it on. For your target, you’ll require something wide, so that you can hit it with a degree of consistency. As far as materials go, wood presents the best option. You want softwoods, such as Poplar, Cottonwood, or Pine. Harder ones like plywood or oak will have your knives bouncing off in most cases.

With all this in mind, a perfect target would be a log or a large board. You can get a hold of these in a few ways. The most convenient would be at a firewood dealer’s or a lumberyard. If neither works for you, maybe you can turn to a friend that chops lumber or cuts down a tree for one reason or another.

Finding a Place for Practice

So you’ve got knives, and you’ve got a target. But where to practice? Whenever you do your throwing, make sure it’s on an open, empty plain, be it a field or your backyard. There are a few reasons for requiring this kind of location:

While throwing, your body needs to be relaxed. Stand up straight, while maintaining a slight bend at the knees. Your right foot should stand a little ahead of your body. However, the left one should be planted forward if you throw with your left hand. Stances vary from person to person, depending on what they feel the most comfortable with. You’ll also find your optimal position in time and with enough practice.

Technique: Hold the Grip or the Edge?

Whether you hurl the weapon holding the knife by the blade or the grip depends largely on its balancing. As a rule of thumb, you ought to toss the heavy end first. So, if the edge is heavy, hold the knife by the handle, and vice-versa. When handling your knife, check to see which end feels heavier before you start throwing.

Technique: How to Hold the Knife

Generally speaking, you want to grasp the knife a certain way to ensure a precise hurl. Your thumb, index, middle, and ring fingers do the work, while the pinky’s just along for the ride. The thumb rests on the weapon’s middle, while the other fingers curl around its end. Grip the knife with a bit of force, but don’t hold too tight, and don’t let the wrist wobble. To be sure, what feels right depends on the person holding the knife, so adjust your grip as needed.

There are a couple of well-established grip variants you can work on mastering:

Technique: How to Throw

Once you’ve got your grip down, the time comes for you to hurl that knife! As mentioned before, your body must be relaxed. Square up your shoulders and bring your forward leg back a little. Move your throwing arm up over your head, with a small bend at the elbow. Then, swing the arm downward at the shoulder, maintaining a tight wrist. Release the knife and extend the hand in the throwing direction. The arm should continue its swing after the knife leaves the hand.

How to Tell You’re Throwing Properly

If you find that the knives you’re chucking keep hitting with the handle or don’t land straight, you may need to change the distance between you and your target. This is because the blade either spins too much or not enough to meet the target with its point. Simply relocate, try again with the same knife-throwing technique, and see what happens.

Under ideal conditions, the weapon should penetrate the target at a horizontal angle. If the knife sticks at an angle with the handle being higher than the point, the weapon has rotated too much mid-throw. The solution is to approach the target a little closer. Meanwhile, if the handle lies lower than the point, you may need to move away. This applies to throws while grasping the grip, so the opposite goes for edge-holders.

How Much Should the Blade Spin?

Theoretically speaking, the knife can spin as many times as you’d like, depending on the distance it travels. The most well-established and proven-to-work spin techniques, though, are the full-spin, no-spin, and half-spin.

This is the most widespread technique in the knife-throwing community. When thrown this way, the knife spins half a circle (shocking, right?) before impact. You execute this move mostly like you read a little above. When throwing, don’t use too much force, and release when the weapon is in front of you. Don’t snap the wrist!

To be a tad nitpicky, the blade does actually rotate during the no-spin throw — about three quarters. In accordance with your throwing distance with the half-spin method, you’ll probably want to practice this one half-way closer to the target. For the optimal hurl, use a knife balanced near the center. Please note that this technique is more advanced, so you ought to work your way up to taming it.

Here’s what you do. You grab the knife in the pinch grip, only with the index finger extended, rather than curled. Keep your grip as close to the weapon’s end as you can. Then, raise your hand until the blade tip of the knife points to the sky. Swing your hand downwards, stepping into your throw and bending at the shoulder instead of the elbow. Your swinging hand should wind up with the index finger pointed at the ground.

As you moved closer to the target for the no-spin, you should be farther away than on the half-spin. This time you should stand at twice the distance than the latter. In fact, your distance ought to be that plus your arm’s length. From there, proceed with the normal technique and adjust to your preferences.

This guide should prove sufficient to help you improve your throwing. From there on, only practice will allow you to master it. Before you go off on your own, a few more helpful tips should aid you in making your knife-throwing effective and safe.

With all of this, you have the knowledge it takes to become an expert knife thrower. You’ll fumble a lot, and it may even feel frustrating, but with enough hard work, you’ll learn how to throw with great precision. Keep practicing, stay safe, and stay sharp!