When lost deep in the wilderness, everything poses a challenge. Even once simple things like getting from one point to another become exceedingly difficult. If you’re on heavily forested terrain, the ground is usually uneven and full of obstacles. And if there’s a river in front of you, you would have to walk all the way around to find a path across it. Trudging through that kind of area is often barely worth the effort.

Traversing water, though, tends to be far smoother. In some cases, like being stranded on an island, it’s the only option (save for waiting to get rescued). But swimming will wear you out just as quickly as walking. That’s why, in some scenarios, building a raft or boat of some kind could save your life. But how to build a boat in the wilderness? That’s what you’ll learn about in this guide.

What Materials and Tools Do You Have Available?

How well your boat will fare depends greatly on the materials you have at your disposal. Tools like knives and rope also make the construction process far easier.

As far as materials are concerned, you should naturally look for something that floats. If you’re situated in a forest, there should be plenty of dead branches and logs for you to use. Beware, though, of using too many branches! They may appear to float at first but will soak up water and time, making them sink. Ensure that the wood is dry yet tough enough to support your weight.

If you don’t have trees available, see if there’s anything buoyant you can make do with nearby. To check if it doesn’t go under, throw, or push it into the water and see what happens. If there’s nothing around that does the trick, you probably shouldn’t consider building a raft in the first place.

Tool-wise, having a chopping/cutting weapon goes a long way — a knife, machete, or an ax would be perfect. To connect the materials for the raft, you’ll require a rope or anything similar. And if rope is in short to no supply, you can use vines or the bark of certain plants. You can even make your own cord out of some species of flora (like dogbane).

Do You Even Need a Boat?

Before you get to building, ask yourself if a boat is absolutely necessary for your situation. Creating a raft takes time and effort (some more so than others). What you must determine is whether it’s worth doing in the first place. Maybe it would better suit the occasion to find a better way around the water.

If you’re on an island, however, this question becomes even more pressing and vital. Sometimes, escaping the island becomes your only recourse. But if you opt for that, you expose yourself to massive risk. For example, if your raft isn’t stable enough, it could fall apart miles from shore. In addition, setting out to sea means leaving with a limited supply of food and water for who knows how long. Besides, you can’t make smoke signals for help while you’re at sea.

Nine times out of ten, sailing off on a makeshift raft to seek rescue results in disaster. Nevertheless, it’s always useful to know how to make a seaworthy raft. At least that way you’ll stand a slightly better chance of staying alive.

Log rafts are sturdy if you build them properly. Furthermore, their large surface allows you to rest on it entirely, rather than have a part of you submerged. That makes them terrific for longer, more treacherous voyages, especially in cold water.

On the other hand, they weigh a ton, so transporting and building them can cause problems. To remedy that, build them near water (or even in the water, which will make moving the logs easier).

In contrast to their log counterpart, poncho rafts are more portable. However, they aren’t optimal for cold water, as they entail your swimming as you lean on them. Although, they’re more than capable of supporting your gear while crossing a body of water. 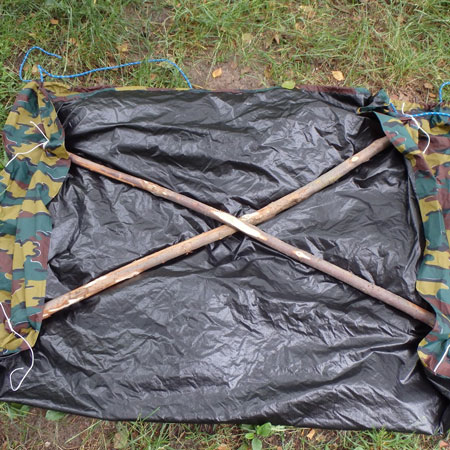 You’ll need a few things to fashion this raft for yourself: two ponchos, some brush (fresh and green), rope, and two small saplings or branches. If you lack a poncho, you can utilize something else waterproof, but it will prove more complicated. What you do is:

With this guide, you’ll be more than well prepared to assemble a buoyant platform to safely whisk you across rivers and other such bodies of water. In the gravest of situations, it will even take you far away from the shoreline. Of course, the best advice we could give you is to take every precaution needed to prevent having to resort to building anything! Whatever the case may be, you’ll now know what the best course is for ensuring your survival.