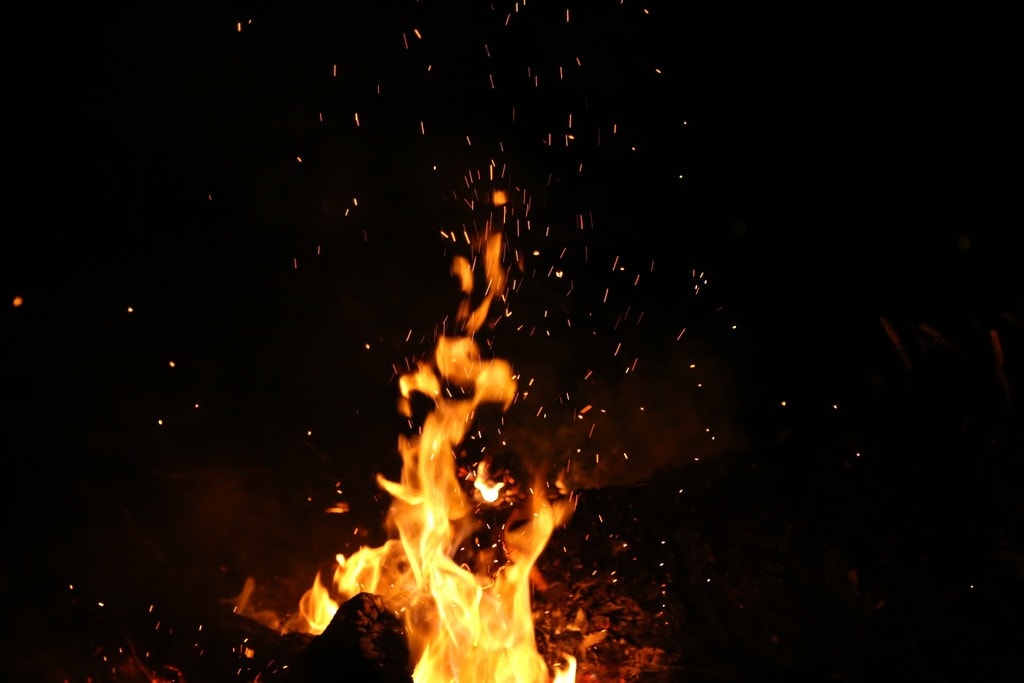 When you go camping, building and starting a camping fire is a major part of the spectacle. There’s something strangely satisfying in being outdoors and staring into a campfire. From the beginning of mankind throughout the passage of time, we have been fascinated by fire. Both ancient mythologies and modern religions have stories about how men came across the first fire. Whether it was Prometheus who stole it from the Olympus or if it was the fallen angel Azazel who taught us how to make campfires, either way, we are still fascinated with watching the fire burn.

There are a lot of fire starter tools you can buy nowadays which will help you start up a campfire in no time. For instance, you can bring along a fire pit (or a fire ring) and some hexamine fuel tablets which are highly combustible and start a fire in a matter of seconds. However, when you’re going camping or on some other adventure in nature (like a jungle, for example), you don’t want to clatter yourself with too many materials. Yes, these are handy and practical, but they’re not really necessary, and you can make a campfire without them. All you need is tinder, kindling, and fuelwood. But before we go into the specifics of what’s kindling and what’s firewood, let’s start at the beginning — land management!

Whether you want to make a small fire for visual purposes, or a big warming fire that can roast an elk Joe Rogan-style, all campfires have the same starting position. The first thing you have to do is make sure that the ground on which you’re building the campfire is clean. You want to make the fire on bare ground, so remove anything that’s lying around, like plants, grass, bark, and so on. All of these can quickly catch fire and you can cause its spread, which is a big no-no. Naturally, fire is highly volatile and it will spread easily if you’re not careful enough.

If you can’t find a surface only covered with dirt, you should dig around a bit and create it yourself. Just be sure you pick a spot that’s at least six inches away from your tent and it’s not lying under some low-hanging tree branches. Again — safety first. When you mark the spot, surround it with stones. Usually, you’d want it to be up to 6 inches in diameter. After that, you need the material. 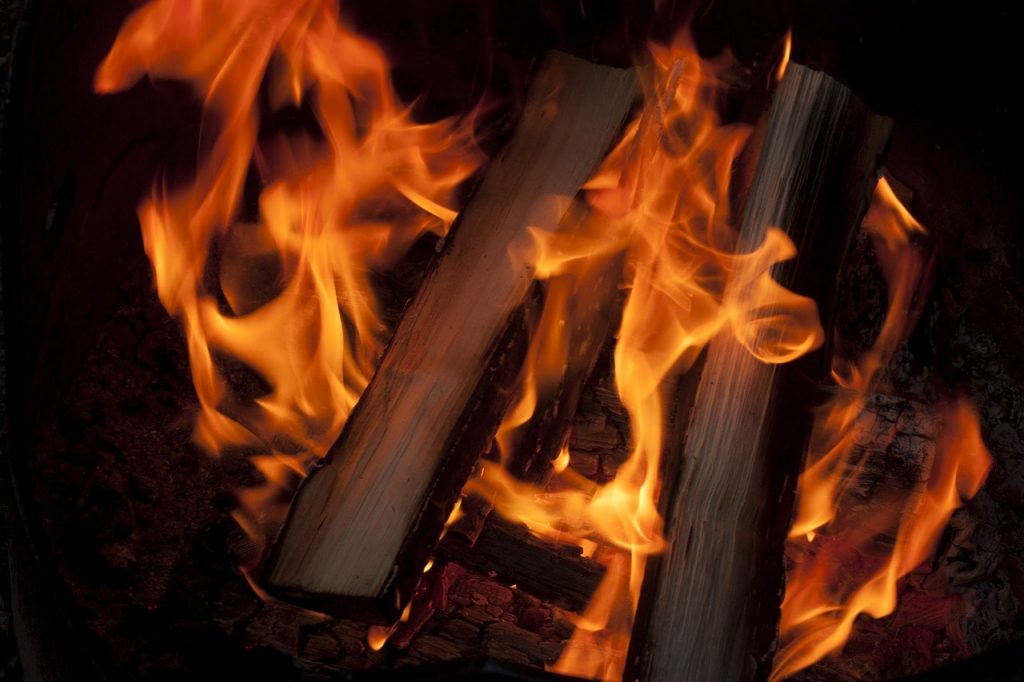 Firstly, you need tinder. You can use dry grass, bark, wood shavings, fluffy fungi, dry leaves — basically anything that’s small and easy to catch on fire. This will be your initial burning material and you need it to be completely dry. Look under the tree bushes and in other covered spots.

Secondly, there’s kindling. Kindlings are branches and small pieces of fuelwood, not thicker than your fingers. They represent the bridge between tinder and larger firewood. They are in between the two, as they don’t catch fire as easily as tinder, but they last longer.

Lastly, you need firewood. Those are larger pieces of wood (but don’t overdo it, they shouldn’t be thicker than your wrist) which will last longer than the rest and they will be the main fuel for your fire. If they are wet, they will produce more smoke than fire, so if you want to avoid that, cut away the bark.

The general rule of thumb is to gather twice as much material as you think you’ll need. Something always goes wrong.

When you pick a spot and secure the material, it’s time to make a structure. There are four common campfire structures, which are also the easiest to make, and we’ll now walk you through them.

Crossfire structure — Arguably the simplest type. You just place your tinder in the middle and put the kindling on top of it in a crisscross fashion. Do the same with fuelwood and you’re set to go. This is ideal if you don’t have a lot of material.

Teepee structure — Make a bundle out of your tinder and place in the middle of your impromptu fireplace. Above it, you should use kindling to form a teepee structure (you know what that is, don’t you?). Make sure you separate the kindling, leaving space for wind and air to blow through — there’s no fire without air! After that, repeat the process with firewood and make a teepee around that kindling.

Lean-to lay — Similar to a lean-to shelter, you stick one long piece of kindling into the ground and build around it. It should be approximately at a 30-degree angle, so that you can put tinder under it. Lean smaller kindling onto the side of the stick and then add another layer of it on top.

Log cabin — Log cabin structure is an enforced teepee structure. Once you place the tinder bundle and make a teepee with kindling, you place fuelwood around it. Put down two pieces parallel to each other, and then place two more on top of them, alternating them for 90 degrees.

When you’ve done with the structure, just light the tinder from several positions and watch the magic happen. We can’t stress enough how important it is to leave space between kindling so that the air can come through!

Fire in the Rain

Although it might seem illogical at first, but building a fire in wet conditions is possible if you know what you’re doing. In fact, the process is exactly the same — it’s just more tedious.

The problem with the rain is that it makes everything wet which makes it a bad companion of fire. You have to make the conditions where there’s no water present or too little for it to beat the heat. First off, you need to find a dry spot for your campfire. If you can’t find any, dig down until you reach dry dirt and use it to make a several-inch thick platform. Then what you need is dry material. Look around for tinder under bushes and branches. If not possible, use your knife and shave away outside layers until you reach the middle — it will still be dry inside.

The same goes for the other two. Use your knife (ideally, a hatchet, if you have one) to remove the bark and cut away those parts of the stick or a log which feel too damp. You can test the dampness by smelling the sticks for moisture or pressing it against your skin to see if they feel too wet.

Although we said you should avoid building a fire under a tree, this is not the case when the rain’s around. You want to use the shelter of a wide treetop or canopy so that the rain doesn’t go directly into your fire. A bit of it is okay, as most raindrops will evaporate before they can reach the fire.

With all set in place, use your match or lighter and set tinder on fire. If the wet conditions have rendered your preferred weapon of choice unusable, you can use flint and steel as a weather-proof option. If all else fails, there’s always the “rub a stick into a log for hours” option, but nobody really wants to do that.

No Fire Left Behind

Aesthetics aside, making a campfire is hugely important when you’re out camping or on an outdoor adventure, such as visiting the jungle. You need it to cook your food and also boil the water in order to remove any illness-bearing bacteria. On top of that, it will provide you with warmth and the smoke will scare away mosquitoes and other insects. The fire also has a psychological effect on humans — for some reason, we just feel safer and more positive when we can feel the warmth and see the light ejecting from it.

When you’re done with it, make sure you put out your fire. You don’t want any fire flaming about unattended, or you might cause a huge accident. It usually takes 20 minutes for the embers and charcoal to completely cool off. If you don’t have water to waste on sprinkling out the fire, it might take even longer, so prepare yourself for a lengthy clearout.