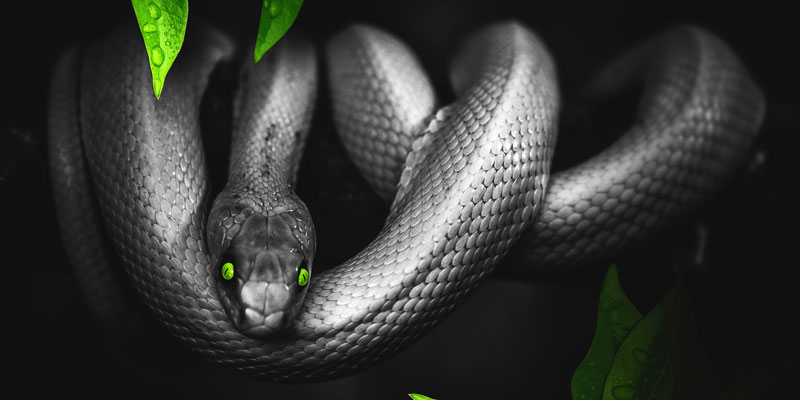 Filled with unique life forms you won’t find anywhere else on Earth, the Amazon rainforest is truly one of the most fascinating hidden treasures on this planet. Nicknamed the “Lungs of the Planet,” it’s the largest tropical rainforest in the Solar System! Moreover, its territory spans across nine nations, including Brazil, Peru, and Colombia.

This almost-otherworldly place is approximately 55 million years old. It contains around 390 billion trees, 2,000 bird and mammal species, around 400 reptile as well as 40,000 plant species.

However, Amazon isn’t exactly the kind of place for a romantic evening stroll. Something sinister lurks underneath the tall, moist treetops! In fact, Amazon’s unparalleled biodiversity contains some of the most toxic, violent, and dangerous creatures in all of creation. Check out our list of the top 10 most dangerous animals in the Amazon rainforest.

10. The Largest Centipede in Existence

Scolopendra gigantea, known for its superbug nickname — the Amazonian giant centipede, is among the biggest centipedes on the planet. It’s up to 12 inches long, and it’s a brutal predator that crawls on Amazon’s forest floor. This creature hunts deadly tarantulas, lizards, and even the deadliest snakes. Others on its menu are mice, frogs, and birds. While hunting, these centipedes like to wrap themselves around their victims. But they never kill their prey. Instead, they’ll feast on it while it’s still conscious and kicking!

Luckily, they can’t eat a human but can inflict a rather harmful bite that results in pain and even high fever.

The bullet ant is among the smallest insects in the jungle, but it packs quite a punch. An average-sized Paraponera clavata ant is around an inch long, but it is one of the most notorious creatures in South America. Its name derives from its freakishly strong bite, which is said to hurt as much as a gunshot. It makes the tarantula hawk wasp seem like a mosquito!

Fortunately, the bullet ant’s bite is not deadly. The side effects, including temporary paralysis, are not so harmful. Plus, there are no records of a human dying from the bite of a bullet ant. Some studies have estimated that an average human would die from around 2,220 stings.

The black caiman, a carnivorous reptile, is a king amongst alligators. It’s one of the biggest alligator species in existence and a force to be reckoned with in the Amazon.

The black caiman makes its habitat appear like an all-you-can-eat buffet, consuming anything from sloths, peccaries (wild pigs), bush dogs, otters, monkeys, and even anacondas. Some of the bigger specimens will not hesitate to even kill cute kittens, e.g., the jaguar. First, this tropical gator uses its massive jaws to seize its prey. Then, it dives underwater and waits for the creature to drown. Its preferred feeding method after that is to swallow the entire thing. But if the prey is bigger, the black caiman will savor it and eat it in chunks.

On average, the size of this thing can extend up to 20 feet, which means humans will not stand a chance.

While the red-bellied lemur is fluffy and adorable, the red-bellied piranha is a fish you would not want to share the waters with. Its attack is not nearly as dangerous compared to what you’ve seen in movies, but this red-bellied fish can induce a whole lot of damage with its razor-sharp teeth. However, what’s encouraging here is that this Amazonian creature mostly hunts for dead or injured animals.

Red-bellied piranhas travel in groups in order to defend themselves, and if provoked, they could induce multiple bites and cuts. Plus, if you’re adventurous enough, this piranha makes for a great aquarium fish, and tons of people own it. The only thing to watch out for is that, if you keep multiple piranhas in one tank, they can eat each other if they get hungry.

Their brightly colored skin looks incredibly unique, but it’s the source of their lethal venom. In fact, the name “dart frog” comes from several Native American tribes, who used to extract the frogs’ venomous secretions and create poisonous blow darts. Thankfully, these frogs only feed on small insects, termites, ants, and mice. But the toxins from one golden dart frog can kill 10 thousand mice. What’s more, only some frogs and birds are immune to the poison.

It seems like everything’s bigger in the Amazon. Take, for example, the harpy eagle. It’s at the top of the list for the strongest and largest raptors in the world. Of course, it was named after the mythical harpy creature. An average specimen weighs around 20 pounds, plus, its wingspan can extend up to 7.5 feet.

With grim grey feathers and haunting black eyes, this king of the skies can swoop down and snatch just about any small to a medium-sized inhabitant of the Amazon. Its not-so-appetizing prey includes anteaters, armadillos, opossums, deer, iguanas, and even capybaras. This means that the ruthless harpy eagle is able to wrap its claws around children. However, it hasn’t harmed any so far, and chances of it attacking are minuscule. It only goes after those who put it in danger, such as hunters.

The assassin bug is incredibly small, but it has a seriously dangerous proboscis. This appendage sticks out from its mouth, and the bug uses it to inject its prey with toxic saliva. The venom is so harmful that it can completely melt and decimate their prey’s organs. The scariest risk for humans, though, is the fact that the assassin bug can spread a tropical disease through their saliva. The condition is called Chagas disease, and if infected, a human can get a fever or experience swelling.

The disease can have a devastating long term effect since its symptoms can appear after up to 30 years. Some studies have found that Chagas disease can enlarge the heart ventricles in humans by up to 30%, and it results in heart failure.

Crotalinae aka pit vipers are a family of poisonous snakes that you can find in the Amazon. One of their defining features are pit organs between their eyes, which give them heat-sensing abilities. There are over 151 pit viper species, and approximately 7 of them lurk in the world’s biggest rainforest. And one of these deadly pit viper snakes is the Bushmaster.

This brown and reddish serpent can grow up to 10 feet and only needs to feed 10 times a year. They are incredibly patient while hungry, though, as they coil up and wait calmly for many weeks. When the right prey comes along, they will execute multiple bites. The Bushmaster’s venom is one of the most toxic and a dose from even the youngest specimen is said to be deadly.

Next up is an even larger creepy crawler! The green anaconda’s size can extend over 30 feet. As far as snakes are concerned, it’s the crown jewel of the Amazon. One specimen can reach a weight of over 500 pounds, and it can brutally devour jaguars, deer, and homo sapien. Similar to the black caiman, it too gets a kick out of drowning its victims first. The reason for this is that the snake is simply too big to move quickly on land.

First, it wraps itself around the prey, drowns it, and takes it all in one big gulp. The good thing here is that the green anaconda eats only once in a couple of months, so you should be safe. But if you do happen to run into one with a serious case of the hunger pangs, it’s better to run as fast as possible.

The creature that has earned the top spot on our list is the Brazilian wandering spider. Even though it’s not really necessary to explain the details behind this grotesque abomination, it’s important to note that the Amazon contains not one, but all 9 species of the eight-legged killing machine. And its name is just as poetic as it sounds! With a 6-inch leg span, this spider travels the Amazonian regions during gloomy nights in search of victims.

Those injected with its potent neurotoxin lose the ability to breathe and make muscle movements. What’s more, its bite leads to severe inflammation and sensory nerve damage. Depending on the venom quantity, a bite from this spider can be deadly to a human. Several humans and children have passed away after being bitten by this spider. Fortunately, the attacks are extremely rare, and when they bite, they rarely deliver a full load.

And to make it even harder, the bite can cause priapism in humans. It can result in involuntary and prolonged erections, which could end in impotence. Interestingly, Brazillian wandering spider has a component which is currently being researched as a powerful erectile dysfunction cure.